Bonneville was out on Utah Lake, May 6, 2020, from 4:30 PM until 7:30 PM. There were strong winds forecast for that time so we were prepared with a storm jib hanked on and ready to reef the main as soon as we got out. This would be Noah's second "Learn to Sail" lesson. In Noah's own words, he was..."a rookie". Little did Noah realize that by the time we returned to the slip that day, he would be a battle hardened veteran. 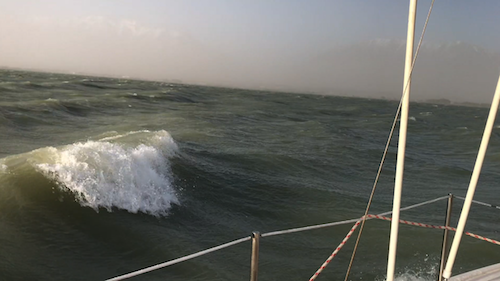 Crossing the lake on a beam reach was actually pretty smooth. Our course would take us close to the Knolls on the west side of Utah Lake. Boat speeds would frequently spike into the 6 knot range. We were able to identify cars on Redwood road, which I figured would be close enough to shore on the west side, plus I would like to get back to Provo around 7:30 PM. Noah pulled off a great tack as we swung the boat around on our new heading towards home base.

The sky was a clear blue...except I noticed that the Point of the Mountain was NOT THERE. A line of "white" actually extended from Alpine (on the east), across the north end of the lake, to Saratoga (on the west). If you were sailing on the ocean, I suppose you could call this a "White Squall". 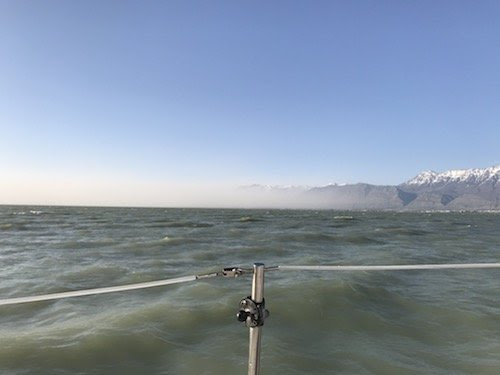 Around 6:45 PM, I received a Windy Lookout alarm on my IPhone. "Strong winds coming from the Lehi / Saratoga area, 35 MPH, heading to the south" came in as a text message. For Noah's lesson #2, that means we are going to be at the wrong place at the wrong time. We have a brief game plan, as this white squall continues to spread across the lake. With storm jib quickly stuffed half way into its deck bag, we get clobbered. The main is let out as our boat speed increases to over 7 knots. Whoa Nellie! Another game plan is discussed as to what to do once we reach the mouth of the harbor. We head up into the wind and waves, to drop the main sail. It felt like we were in a rodeo, with the boat out of the water as much as it was in.

Approaching the ULSP harbor entrance, a State DNR rescue boat is heading out onto the lake. We still have to concentrate on getting in to the protected harbor and the slip. Huge waves are crashing against the close-by jetty rocks. A steering mistake here could be disastrous. Coming in to the inner harbor, there are Search and Rescue vehicles along the north jetty road. They are just launching a large Zodiac inflatable rescue boat on the east ramp. But I have to concentrate on getting Hau Kea safely into it's slip. 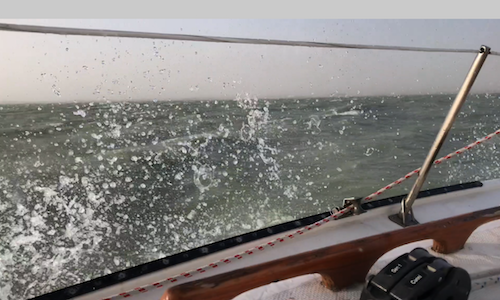 Without having the Winy Lookout App, we would not have brought our storm jib down when we did. I know this helped us keep Hau Kea under control in overpowering wind conditions.

Windy Lookout is a big step in the right direction, but if safety is really an issue, more, much more could be done.

Headed out on calm early afternoon from Lindon Marina. We were out for about 30 minutes with winds at about 5 knots then, oh boy, the wind gusted to 26 knots. Sailing is as they say, "95 percent boredom and 5 percent terror." We experienced the 5 percent at that point. When we returned to the Marina we were asked if we had the app, we didn’t but do now. We use the app religiously.
A well designed app that helps sailors and boaters alike with the ever changing conditions on Utah Lake. I use this app religiously as I make my sailing plans. It has saved me several times from getting into conditions that would be less than desirable!
My father Norman Jones lost his life of Utah Lake. Wind and thin ice contributed to the tragedy. When he left that morning the sun was shinning and the wind was calm. I also grew up boating on Utah Lake and I have witnessed first hand how the condition can change almost instantly! If this app can save one life it will be worth it. Be prepared and take your phone.
Great app! This has been needed for a long time! Really make sailing and all boating so much safer.
We have never had a reliable wind source app while boating on Utah lake until now. This app is amazing and should be used by all boaters. I believe it can, and will save lives. Thank you!!